But He Never Hit Me, How Could I Call it Abuse? 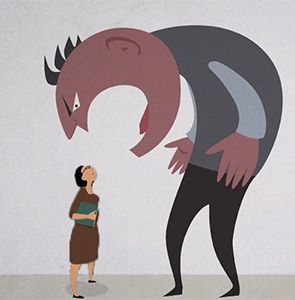 “Viewer discretion is advised.” “The following information could be potentially triggering.”

I’ve seen these warnings and read the article or watched the show anyway, not really understanding what “triggered” meant. But then I read an article called: When It’s an Abusive Relationship, but It’s Not Like He Ever Hit You and I started to cry.

Not because I felt for the person in the story (though I did), and not because it’s so awful that this could happen. But, because the truth is – I was emotionally abused and always denied it.

My ex-husband was 10 years older than I. We met at a cast party held after a play I was in. I had a good part – I was good in it. He complimented me, said he was impressed by what I brought to the role. Would I like to get together and discuss it further?

I was so flattered. S. was a legend in the Theater Arts Department at my college. Photos of him in starring roles were all over the theater, and even though he had graduated many years earlier, directors still asked him to take on challenging roles if they felt the current class of students couldn’t handle it. He and his partner, D. were the golden couple. I had heard they’d broken up – and now he wanted to date me? Wow, I must be special.

We started dating, we got engaged a few months later, we married within the year. All the expressions applied, “he swept me off my feet,” it was a “whirlwind romance” “love at first sight” “meant to be.”

He charmed my family, my friends. He was so sophisticated, and being 10 years older than I, he must know more…his opinions were more valid and valuable…I had a lot to learn…right?

A week before the wedding we had a huge fight – I don’t even remember about what it was about. What I do remember is his cornering me against the wall and screaming into my face. I wanted to call off the wedding. But, how? Everything was ordered, booked, paid for. My family was flying cross-country to be there. What would they think? How could I let him go? He was such a great catch – everyone thought so.

I found out I was pregnant on our first wedding anniversary. I cried. There went graduate school – there went my future. What I didn’t know was that I would fall so in love with my son that it didn’t even matter. Having him filled a place in me that I didn’t know was empty. I had a new role, I was a mom, my husband’s treatment of me was superfluous.

The way S. began to undermine me was so insidious. None of my friends were “good enough.” My photographs were worthless, what, did I think I was an artist? I could list so many comments, so many ways he tried to isolate me, his backhanded compliments, his off-handed insults. If I called him on any of this – well, he was just joking! Why was I so sensitive and insecure?

But, then things started to escalate. He held my arm too tightly, he pushed me too roughly. He would corner me and scream at me. He ripped my wedding ring off my finger and told me I didn’t deserve to wear it. He told me I was worthless in so many different ways. But he didn’t hit me – so it wasn’t abuse, right?

To make a long (long, too long, ten years too long) story short – I finally left him. I took our 8 year old son and left him.

And yet, I never saw it as abuse. I just thought he was difficult, that it was my failure that I couldn’t make it work.

And then, 20+ years later, researching articles for Mental Health Awareness Month, I read the article and realized – it was abuse. And how could I, an educated, successful, strong woman be so mislead? So stupid? So unaware? So….ah, but that’s his voice – why is it still in my head? Because, I was abused and I could not call it that. Until I read that article. And it made me cry.